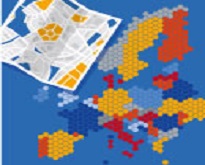 Eurostat offers a wide range of web tools to make it easier to visualise statistical results. Showing data at a regional and local level is often a challenge, as the information available is vast and difficult to condense. That is why we have developed a tool called 'Regions and cities illustrated' to help you have an overview of the situation in your region compared to other regions in the EU in 2018 and over time. The visualisation tool is based on a live data feed, so it is continually using the latest data. It contains maps, graphs and an animated timeline together with separate tabs for regions, cities and territorial typologies. The two main scoreboards are inter-connected, so when you select a geographical area in the map it is also highlighted in the graph. You can now also customise the tool to suit your needs. [+]

Data visualisation tools for regions and cities in Europe [vídeo]

This video from Eurostat is presenting some new online tools for visualising data for regions and cities. Meet Åsa Önnerfors, who is explaining the difference between the Statistical Atlas and Regions and Cities Illustrated by showing some of the functionalities and options available in the two tools. She is also presenting a mobile phone app developed especially for regional data, called My region (Eurostat, 9.10.2018)

Data on regions and cities in the European Union (vídeo)

This video from Eurostat gives a general introduction to data on regions and cities in the EU. How is Eurostat collecting data? Which countries are included? What is the policy background to regional and urban statistics? What is the GEOSTAT population grid? Meet Teodóra Brandmüller, who will present two maps about the Employment rate in the EU as well as the latest edition of the Eurostat regional yearbook (Eurostat, 19.9.2018)

At a time when Europe is striving to retain its legitimacy and relevance in the face of growing disillusionment and Euroscepticism, cities can provide a critical link with citizens. Cities are crucial in shaping the future of Europe, as EUROCITIES already demonstrated in the successful ‘Mayors’ summit on the future of Europe’ in March 2017. By mobilising our network of over 140 Europe's largest cities, that between them govern 130 million citizens across 39 countries, we now want to take the next step and actively demonstrate what citizens and cities can do and are already doing at local level to co-create our future. Throughout May 2018, ‘Cities4Europe - Europe for citizens’ will showcase successful local initiatives that engage citizens, present ideas for new forms of democracy and map out a positive, common future. By looking at answers together with their citizens, cities will have the opportunity to show their commitment to co-creating societies where people come first, and where trust between citizens and public authorities is strengthened.

Our campaign will come alive through various activities in our member cities - from art exhibitions to youth assemblies, from (social) media campaigns to public debates. ‘Cities4Europe – Europe for Citizens’ will kick-off in early May 2018 with a series of actions in all participating cities. A dedicated website will feature interviews with leading European personalities, news linked to the campaign and showcase local and transnational activities. Cities4Europe – Europe for Citizens’ wants to inspire cities and other levels of government, including the EU institutions, to pursue mechanisms and tools that engage citizens in policy making, strengthening new forms of democracy across Europe. [+]